A lot of good came out of globalization in business and trade, giving rise to what is now known as the “global marketplace”. The globalization of markets and competition was brought about, in large part, by the high speed of technological advancements.

As transportation and communication vastly and quickly improved, so did the access of consumers to products and services, even if they happen to come from different parts of the globe. International divides and barriers that used to be seen as obstacles to trade have become manageable, so that even small businesses are now able to sell their products and services to consumers in other countries. 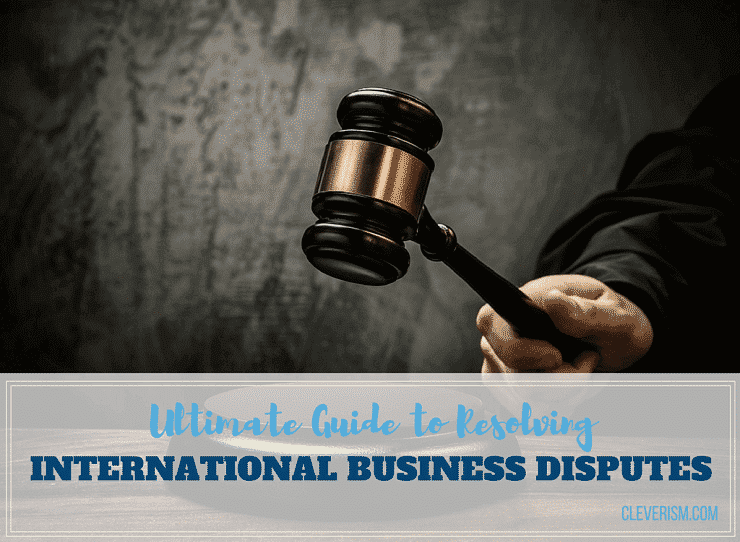 IMPACTS OF GLOBALIZATION OF TRADE AND BUSINESS

Let us go over the many positive benefits gained from the globalization of business and trade. Right off the bat, we can say that the emergence of the global marketplace has resulted in economic growth all across the globe. Floundering economies have been injected with new life, and already flourishing economies find themselves prospering even more.

There are also some downsides to this globalization, and we can see them in the various economic and social disruptions that spring up. It’s like a double-edged sword; it will bring the great benefits, but the negatives can be just as devastating.

In the global market place, international disputes are no longer new. In fact, they are almost always expected to crop up every now and then. What we should focus on, then, is on how to resolve these international business disputes when they do crop up.

International disputes are, by definition, major disagreements between two or more countries on matters such as territory, maritime rights, and human rights, to name just a few. These disagreements may also be over business, considering how trade and business has joined the globalization bandwagon.

International disputes, however, are not limited to two or multiple parties disagreeing actively, because they may also arise from declarations made unilaterally by one country that are not acknowledged or accepted by other countries.

If these international disputes are not addressed and resolved, they could lead to bigger problems of global proportions, such as animosity and hostility between and among countries, tense international relations, or, worse, armed conflicts and wars.

International trade and business, just like your regular domestic business, faces a lot of risks. This is why local businesses establish their own sets of risk management strategies. It is no different in the case of businesses that are engaged in international trade. They are also at risk of being embroiled in disputes and so they should also come up with ways to manage this risk. One way to do that is to pay attention to their dispute resolution measures.

Dispute on the sale of goods or commodities

The dispute could arise from the issues on:

Clearly, this type of business dispute can be easily avoided if the contract was prepared properly and accurately, eliminating any vagueness or ambiguity. Everything should be set out clearly in order to avoid confusion.

Dispute on the roles of distributors and agents

The distinction between a distributorship contract and an agency contract must be made clearly. Often, these two are confused, which leads to disagreements.

Similarly, the agent may also start taking on the role of a distributor, purchasing the products from the manufacturer, and selling them. These confusions in roles are potential roots of international business disputes.

Companies involved in these industries often find themselves working in foreign territories and being subjected to various international rules and regulations. International contracts of this scale are often seen to be riddled with disputes because of any of the following:

Again, these disputes will be avoided if the contract is prepared correctly, and the terms adhered to by the parties involved.

Even during the bidding stage, some disagreements may arise. In fact, in international trade, you will hear many disputes over the bidding process itself, since they cover sensitive topics such as deadlines and mandatory requirements to be complied with. Once the bidding process is done and they move on to the contract, disputes may still arise regarding the terms stated therein.

Countries are becoming increasingly sensitive (and possessive) when it comes to intellectual property rights. And rightly so. You may have heard of disputes on royalties, patent and trademark licensing, as well as the transfer of technology and/or technical know-how, and even the provision of technical assistance.

There is no fixed rule on how you can resolve a business dispute that is on an international scale. You cannot expect to use a method that you used to resolve one dispute on another, since there may be circumstances that they differ in. However, the basic approach towards solving the dispute is very much similar in international disputes.

There are several ways to resolve an international business dispute, and they can be classified into two: jurisdictional (arbitration and litigation) and non-jurisdictional (alternative dispute resolution or ADR and mediation).

When you hear disputes concerning importing and exporting of international commodities, you often hear arbitration being the preferred method of resolution since it is faster and less costly. It is also not as divisive as, say, a court action or litigation taken between two parties in conflict.

In other words, instead of going into trial, parties may opt to undergo arbitration instead.

When two parties in dispute agree to go into arbitration, both agree to be bound by the ruling or decision of the arbitrator, who is the one who will hand down the decision on how to settle or resolve the dispute. He hands down his decision, and the dispute is resolved. In short, he acts as a judge, which means that sometimes his decision may also be contested.

There are two types of arbitration:

Most businesses try to avoid litigation as much as possible. After all, as mentioned earlier, they can be far costlier, and definitely more stressful. Compared to arbitration, litigation usually takes more time. Litigation, then, is seen as the last resort when arbitration, mediation and conciliation are unsuccessful.

In this method, the disputes are submitted to the court which has the jurisdiction over it – it may be the country of the one who is making the claim, or that of the respondent. There may be another dispute on which tribunal or court should have jurisdiction (which is another reason why businesses want to avoid going to court unless they have to).

There are also other considerations to be factored in, such as the applicable laws and the language and culture of the territories.

Another alternate dispute resolution scheme that stays away from jurisdictional process is conciliation, which is currently governed by the Conciliation Rules adopted by the United Nations Commission on International Trade Law (UNCITRAL).

In conciliation, the parties involved are:

Just like arbitration, there are two types of conciliation proceedings that may be conducted by the conciliator:

In an analogy made by Daniel Q. Posin, he likened the resolution of an international business dispute to a simple case of a rear-end SUV collision. The parties involved undergo mediation in order to avoid the “risks, expense, delay and the stress of litigation” that are likely to result if the dispute is not resolved. In short, there is not much difference between international business mediation and domestic mediation; it’s just the scope and the scale that is different, but the concepts are basically the same.

Mediation and conciliation are also similar in many ways. However, the third party is known as the “mediator”. He will examine the claims of the disagreeing parties and, after evaluation, presents possible solutions to resolve the problem.

His role is to present all sides of the story to the parties, without trying to influence them to decide on one thing. He does not propose a way to resolve a problem, he just presents possible solutions. The final decision on whether to choose any of these possible solutions remains in the hands of the parties. In other words, the mediator also acts as a guide and a moderator.

The name may deceive you into thinking that it is a judicial process. In a way, it looks like one, but it is not. It is, for all intents and purposes, a shorter and non-juridical version of a court trial. Currently, this method is used in the United States, and its main objective is to get disagreeing parties to reach an agreement and an amicable settlement without going to a full trial.

Both parties will choose their own legal counsels or representation, and the mini-trial conducted in front of senior executives of the parties, in the presence of advisers or observers who will take a neutral stance throughout the proceedings. In the proceedings, they will be giving advice when asked, and the senior executives are there to come up with an amicable settlement or solution, and not to decide on who will win the dispute.

Resolving international business disputes is not an easy task. Fortunately, there are processes in place that can be used in order to speed up the process and ensure the international trade continues to operate smoothly, and the global marketplace does not suffer from unresolved disputes. Every business or organization in the world possesses huge amounts of information, data, knowledge …

In Mountain View, we meet co-founder & Evangelist of Eyefi, Ziv Gillat. He shares his story how …